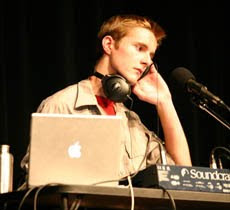 On Friday, January 29, 2010, it was my privilege to attend the evening performance of “4 A.M.”, presented by the Cambridge-Isanti High School Theatre Department as part of the 2010 State One-Act Play Festival.

An ensemble piece written by Jonathan Dorf, the play explores the question, “What’s it like to be awake when the rest of your world is asleep?” Teen characters examine themselves, their relationships, and their place in the world through a series of vignettes and monologues tied together by the character of Frankie, a lonely and somewhat isolated radio DJ.

“4 A.M.” premiered at a similar festival in Edmonton, Alberta, Canada in April 2009. It is one of many plays and monologues written by Dorf, who holds a Master of Fine Arts in Playwriting from UCLA.

While the entire cast is commendable, special kudos go to Jake Budnick and Tylinn Fahrni. As Frankie, Mr. Budnick transcends the stationary nature of the part through the use of his very expressive voice, while Ms. Fahrni is remarkably natural and unaffected as Jane.

The Cambridge-Isanti High School Theatre Department hope to bring their interpretation of the play to the State Tournament, which will be held in the O’Shaughnessy Auditorium at St. Catherine’s University on February 11, 2010.