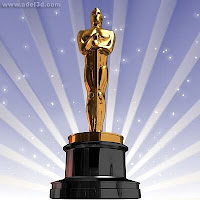 On the evening of March 7, 2010, the 82nd annual Academy Awards were presented at the Kodak Theatre in Hollywood.
The Academy of Motion Picture Arts and Sciences was officially organized on May 4, 1927, but the first “Oscars” were not awarded until May 16, 1929. That evening, in the ballroom of the Hollywood Roosevelt Hotel, “Wings” was named “Best Picture” of the year. Emil Jannings and Janet Gaynor took home the acting prizes.
Fast forward 81 years. On March 7th the following winners were announced:
Best Picture: The Hurt Locker
Best Actor: Jeff Bridges in “Crazy Heart”
Best Actress: Sandra Bullock in “The Blind Side”
Best Supporting Actor: Christoph Waltz in “Inglorious Basterds“
Best Supporting Actress: Mo’Nique in “Precious”
Best Director: Kathryn Bigelow for “The Hurt Locker”
It was a night of firsts! Bullock, Waltz, and Mo’Nique were all first-time nominees, and Bigelow was the first woman in the history of the Academy Awards to receive the “Best Director” prize. Also, for the first time since 1943, ten films were nominated for “Best Picture”.
Here are some fascinating facts about the Oscars:
Most Awards (11): “Ben-Hur“, “Titanic”, and “The Lord of the Rings: The Return of the King”
Most Nominations (14): “All About Eve”, “Titanic”
Most Awards – Acting (4): Katharine Hepburn
Most Nominations – Acting (16): Meryl Streep
East Central Regional Library has many Oscar-winning films on DVD and more are being added to the collection on a regular basis. Check our catalog!
The best book ever written about the Academy Awards is probably “80 Years of the Oscar” by Robert Osborne. It’s located in the central reference collection at the Cambridge library for your enjoyment and perusal.
Bob Gray
Reference and Interlibrary Loan Librarian