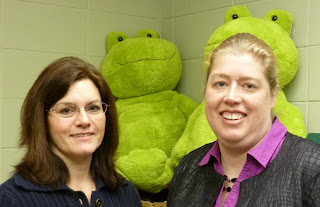 Director Barbara Misselt recently announced the addition of two new staff members to the Headquarters staff of East Central Regional Library.   Carla Lydon was named the new Assistant Director and Shelly Anderson was named new Administrative Services Manager.
Carla assumes the Assistant Director position for Nick Dimassis, who left in December for a new position as director of the Carver County library system.  Carla was most recently the Chisago Lakes Branch Librarian, a position she held since June 2008.  Carla worked with several community support groups and developed a thriving volunteer program.  As ECRL Assistant Director she will lead and supervise ECRL’s 14 branch libraries located in the counties of Aitkin, Chisago, Isanti, Kanabec, Mille Lacs and Pine.  Carla will also share administrative duties and be part of ECRL’s regional library management team as well as representing ECRL on various statewide committees.
Carla has demonstrated a long commitment to libraries and achieved a broad portfolio in providing information in a variety of libraries throughout the years.  She started out as a Page at the Howard Miller Public Library in Zeeland, MI.  While pursuing her undergraduate degree in mathematics, she worked at the Van Wylen Library Hope College in Holland, MI.  She received her Master of Library and Information Science degree at the University of South Carolina.
With her new degree in hand she worked as a Children’s Librarian at Charleston County Public Library in South Carolina and as a media specialist for Charleston Public Schools before coming to Minnesota.  In Carla’s vision for public libraries, she sees the library as a physical space, a community gathering place, a technology center and information center.  Carla and her husband, Dan, live in Lindstrom, MN.
Shelly Anderson became the new Administrative Services Manager following Shari Wilcox who retired after 38 years in the position this past December.  Shelly comes to us with numerous bookkeeping and accounting experience.  As the new Administrative Services Manager, Shelly will oversee the financial operation of ECRL’s 3 million dollar budget.  Shelly lives in Rush City with her husband, David, and her family.