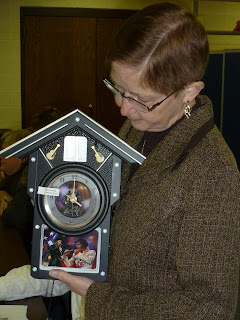 One day in May 1973, a young gal by the name of Shari Wilcox stepped into the original East Central Regional Library building and applied for the job of catalog typist for Technical Services. Little did she know that it would be 38 years later when she would walk out the door and end her career at ECRL.
Shari was so excited in 1973 because she had a window by her desk and she could gaze out the east side of the library. Well, that view lasted a grand total of 2 days! The windows on the east side of the building were closed up so the present day garage could be built. For the next 37 years, 363 days, Shari would never see the light of day again through a window from her workstation.

Shari worked as a catalog typist in Technical Services for 6 ½ years and then moved into the accounting and bookkeeping position after the previous employee, Leona Medin, retired. During her tenure, Shari worked for 5 East Central Regional Library directors. The Regional library budget went from less than 1 million a year to 3 million a year and Shari’s position went from Administrative Assistant to Administrative Services Manager.

Remember card catalogs, records and audio cassettes? That’s what you would have found in the library in 1973 when Shari started working at ECRL. At that time she could not envision all the technology that would be a part of the library today. One thing that has not changed in her time at ECRL, however, is the yearly struggle with the budget. Shari feels it will continue to be the biggest challenge facing ECRL in the future.

“I’ll miss the people I work with the most,” says Shari. “They have made my job easier, so it will be very hard to leave them.” Over her 38 years she remembers working with lots of different people – she says Eunice Wickland, Mary Koepsell, Barb Nord and Sandy Novak and many more come to mind. Many became lifelong friends.

The East Central Regional Library Board recognized Shari for her years of service at a brunch and presentation on Monday, December 12 and her friends and co-workers will be celebrating with her before she retires at the end of December. What’s in store for Shari when she retires? She says, “relaxing, relaxing, relaxing and reading the long list of authors and titles I want to read.” It’s a good thing she’s got great connections at the library!