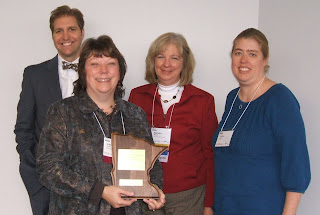 The Evy Nordley Award was presented by the Minnesota Association of Library Friends. The award recognizes the importance of Friends of the Library projects and the impact they have on their local libraries. Second and third place winners went to the Friends of the and Pelican Rapids Public Libraries.

The Cambridge Friends won the award for their 2009 Community Wide Read program which featured the Night Birds by Thomas Maltman, a book about the Sioux Uprising of 1876. The Community Wide Read Program included book discussion groups, a documentary and a hoop dance presentation by Dallas Chief Eagle. A companion children’s book about the Sioux Uprising, Battle Cry by Jan Neubert Schultz, was also part of the program. The award was judged on the impact of the project, the objectives, cost effectiveness, collaboration, planning, the target audience and funding sources.

Along with the $1000 cash award, the Friends were given a beautiful plaque representing their accomplishments. The award is on display at the Cambridge Public Library. Congratulations Friends of the Library!