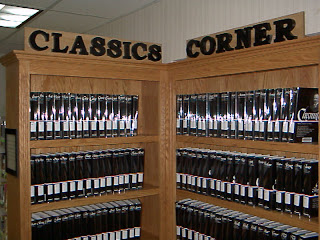 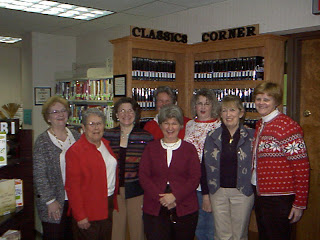 For example, for early-American history buffs, check out the Writings of our Founders: Washington; Jefferson; Franklin; Madison; Hamilton; and Paine each have a volume in the series. Or tackle the monumental history by Henry Adams on the Administrations of Jefferson and Madison. (By the way, when’s the volume of Henry’s great-grandfather–our second president–coming out?) Perhaps you wish to go back further with Captain John Smith’s Writings, with Other Narratives of Roanoke, Jamestown, and the First English Settlement of America. Francis Parkman’s history, France and England in North America, is a must-read ending with (spoiler alert!) England’s victory in the French-Indian War. 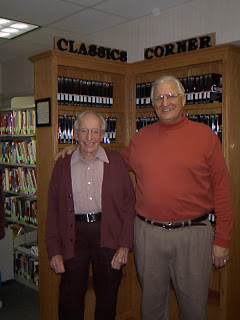 Picking up the story from there, The American Revolution: Writings from the War of Independence, gathers the literature surrounding the birth of our nation. Of course, it’s one thing to “dissolve the political bands” between peoples and quite another to have to establish one’s own. For that attempt, see: The Debate on the Constitution (Vols. 1 & 2).

With an outsider’s perspective, Alexis de Tocqueville’s Democracy in America offers a portrait of our country’s social and political character that is still considered one of the best. Then back to Parkman for The Oregon Trail, a chronicle of his 1846 trip West, his encounters with the Plains Indians, and a vanishing frontier. The two volumes of Lincoln’s Speeches and Writings, which begin in 1832, are excellent accompaniment to the many outstanding books currently being published to celebrate the bicentennial of his birth. 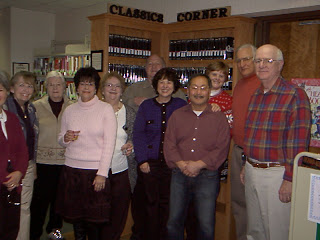 Below: Never letting a fundraising opportunity pass, the Friends held a silent auction. A few elbows were thrown as the clock ticked down but no injuries were reported. Below Left: Silent Auction items and (front to back) Carrie Olstead, Judy Loken, Sylvia Marcotte, JoAnn Alexander. Middle: Irene Sandell plans her strategy. Right: JoAnn Alexander (below left) reveals her talent for accessorizing by putting a quilted Christmas tree skirt to use as a cape. 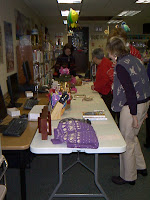 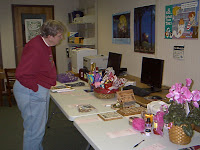 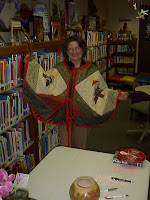 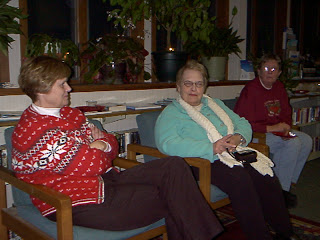 Perhaps fictionalized accounts of these times are more your style. Then take a look at James Fenimore Cooper’s The Leatherstocking Tales, which includes the novel “The Last of the Mohicans.” Washington Irving’s and Nathaniel Hawthorne’s stories also present windows through which to view our nation’s early years. The Writings and Drawings of John James Audubon capture the natural landscape, as does the work of environmentalist William Bartram (1739-1823), described as “the most significant American writer before Thoreau and a nature artist who rivals Audubon.” 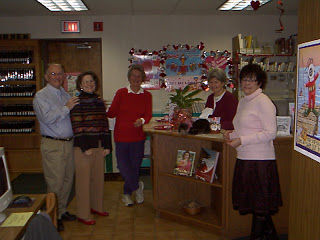 Explore other aspects of the cuture with American Poetry: The Seventeenth & Eighteenth Century (2 vols.); American Sermons: The Pilgrims to Martin Luther King; American Sea Writing: A Literary Anthology; or American Speeches: Political Oratory from the Revolution to the Civil War. Civil War? Read on! 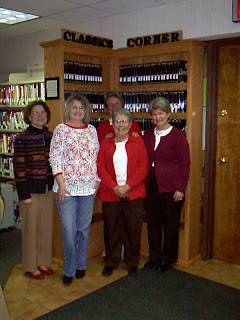 There’s the Memoirs of Generals William T. Sherman and Ulysses S. Grant, The Autobiographies of Frederick Douglass, and the anthology of Slave Narratives. Post war? How about little-known Lafcadio Hearns’ American Writings, “the master of a gaudy and sometimes self-consciously decadent literary style…a tough-minded and keenly observant reporter, with an eye for the offbeat, the sensual, and occasionally the gruesome”?

And I’ve only described one avenue through this collection!

Talk to Jeanne or Carol about what’s available–or, better yet–come on in and browse through these wonderful books and discover on your own.

Also, go to the Library of America website for their description of each volume.